Powerhockey is a parasport for individuals with physical disabilities that use a power wheelchair. The sport is inclusive by nature, allowing para-athletes of varying disabilities to participate together, regardless of gender or age. Para-athletes are able to compete to the best of their ability and excel in a competitive sports environment. Off the floor, the sport fosters lifelong friendships and relationships that cross borders, creating a strong, tight-knit community.

Where is powerhockey around the world?

Powerhockey is played in many countries! The sport is played in both Canada and the United States as well as in European countries such as the Netherlands, Denmark, Italy, Germany, Finland, Czech Republic, Belgium, among others, and even as far away as Australia! The North American and European games differ somewhat when it comes to rules, however at their core are the same sport.

Yes. The sport is played at both the recreational and competitive levels and are fast-paced and action-packed. Regardless of disability, para-athletes demonstrate immense skill, whether it be as a forward, defence, or goaltender, giving it their all each and every shift.

The amazing thing about this parasport is that it’s distinctly inclusive and truly any individual who uses a power wheelchair can play. Regardless of your disability, age, or gender, if you want to play, you can! For the players that have limited arm strength, a stick is often attached to the power wheelchair. For stick-attached players, many use a T-stick which allows them to still be able to control and carry the ball down the floor.

What equipment is used and where are games played?

To play powerthockey, players are required to use a power wheelchair. Most often a floorball style of stick is used by players who are able to hold onto their stick as they are lightweight and improve their ability. Players that attach their stick to their chair oftentimes use a standard floor hockey stick. A lightweight, hollow plastic ball with holes in it, more commonly known as a floorball ball, is used. Games are usually played on a hardwood court or occasionally a sport court.

What are the rules?

The current PowerHockey Canada rulebook states that teams are comprised of twelve (12) players maximum with a total of five (5) on the floor at a time, including the goaltender. Players are ranked on their level of abilities from 1 to 3. A Level 1 player is deemed the most skilled and teams are only permitted to have one Level 1 on the floor at a time. A Level 3 player has less physical abilities and oftentimes attaches their stick their wheelchair. A team must have a Level 3 player on the floor at all times, not including the goaltender. It’s important to note that players that are ranked a Level 3 are integral parts of a team’s chemistry and strategy defensively as they have exceptional skills with positioning and are therefore tough opponents to play against.

Games consist of three (3) periods that are 15 minutes in length each. If the score is tied at the end of regulation time during a playoff game it will go to sudden-death overtime. If the score remains tied after the overtime period a shootout will occur to determine the winning team.

The rules of powerhockey in North America are similar to that of ice hockey. There are slight differences in order to adapt it to powerhockey such as the inclusion of penalties like Dangerous Driving and Tipping. 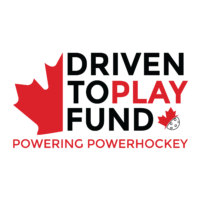